PhD candidate at the Synthetic Biology Tools for Yeast group. Vasil finished his Master degree in Industrial Biotechnology at the University of Padova, Italy where he was also involved in the study of micro-algaes for biofuel production.
After graduation he was involved in different projects concerning metabolic engineering and siythetic biology. First he was a trainee at Biosyntia ApS, where he focused on pathway manipulation and libraries construction and later he worked as a trainee at the Synthetic Biology Tools for Yeast group, where he focused on biosensor development. 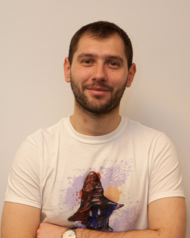 PhD project 8: Biosensor for detection of pathway intermediates and chemicals, and enzyme evolution

Directed evolution of key enzymes involved in conversion of substrate intermediates to high-value chemicals has proven vital for pathway flux optimization. In this project the talented student will be using saturated mutagenesis and high-throughput screening using biosensors to select protein variants with improved performance for one or several candidatetest beds. By way of vigorous FACS-based gating, subpopulations will next-generation sequenced in order to understand the structure-function relationship of evolved enzymes, and use this information for rational design of new enzymes. The project is in collaboration with SeSam Biotech (GER).